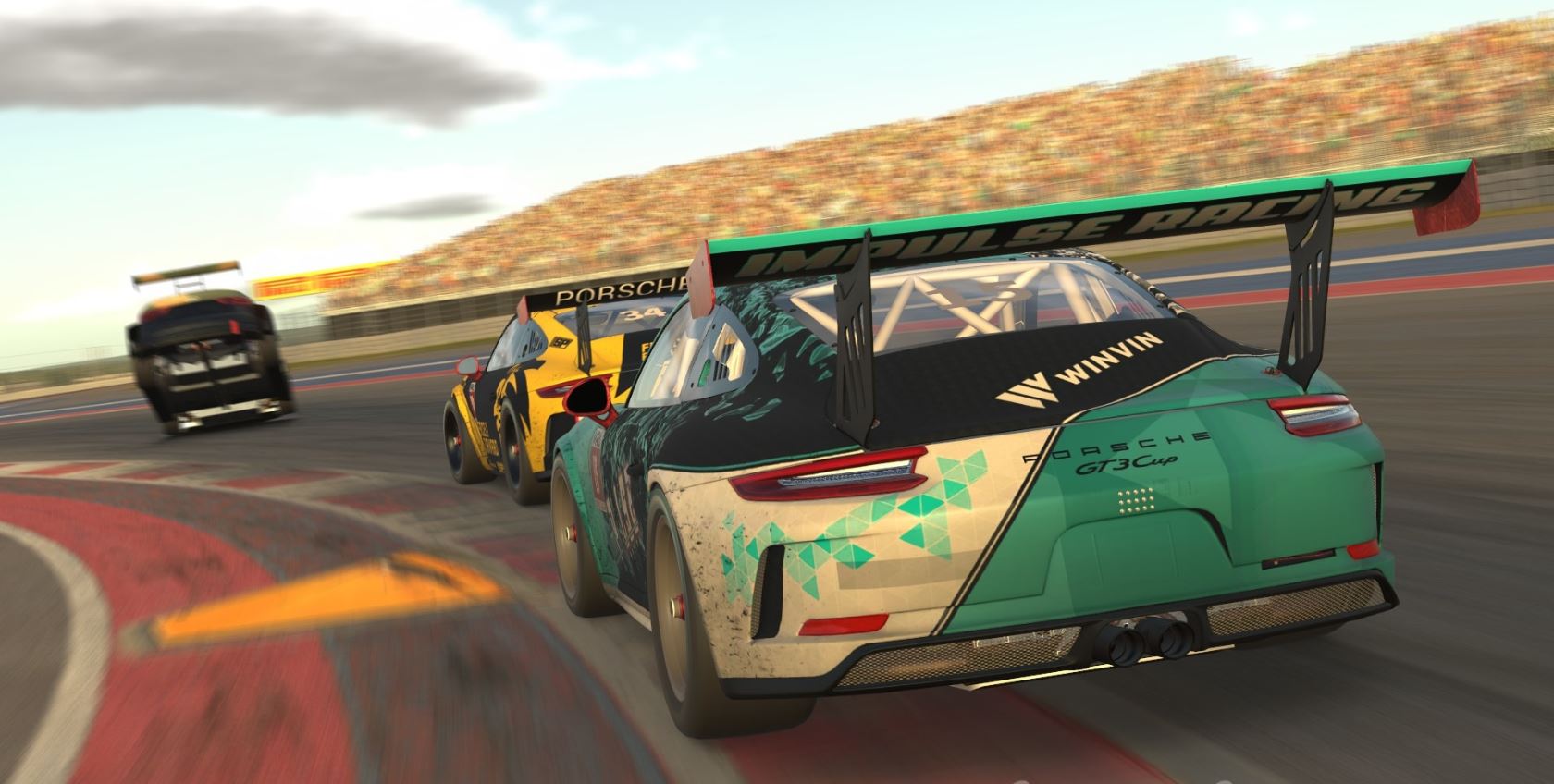 Porsche Cup gets the first podium of the season!

Last Saturday, round 2 of the IVRA Clubsport season took place at COTA. With this race, IVRA Clubsport continued their season in the United States of America. The circuit and Grand Prix was first proposed in the middle of 2010. It was the first in the United States to be purpose-built for Formula One. The design is made by the same person designing the Sepang, Shanghai, Yas Marina, Istanbul, Bahrain, Yeongam, and Buddh circuits, as well as the reprofiling of the Hockenheimring and Fuji Speedway. 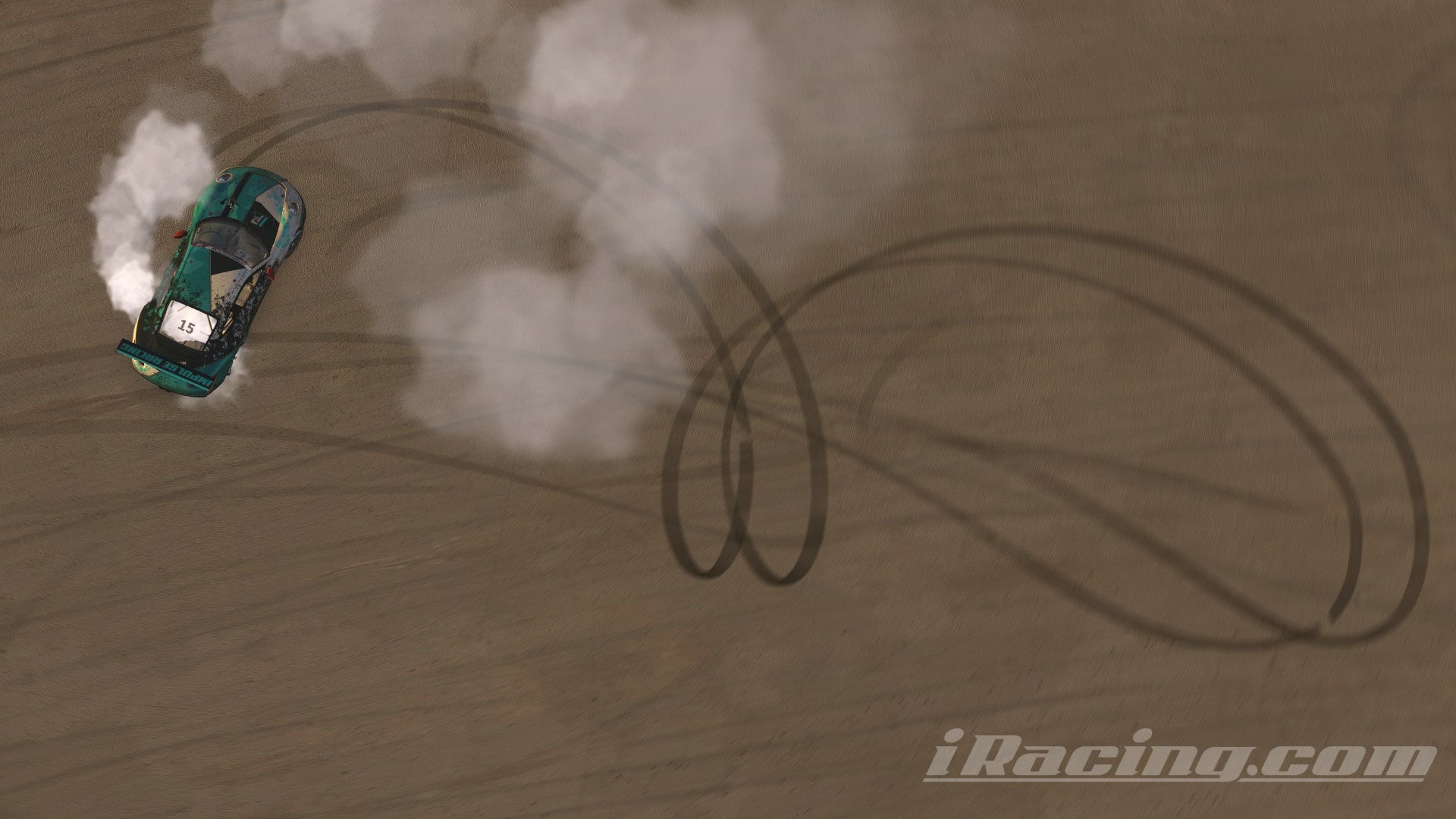 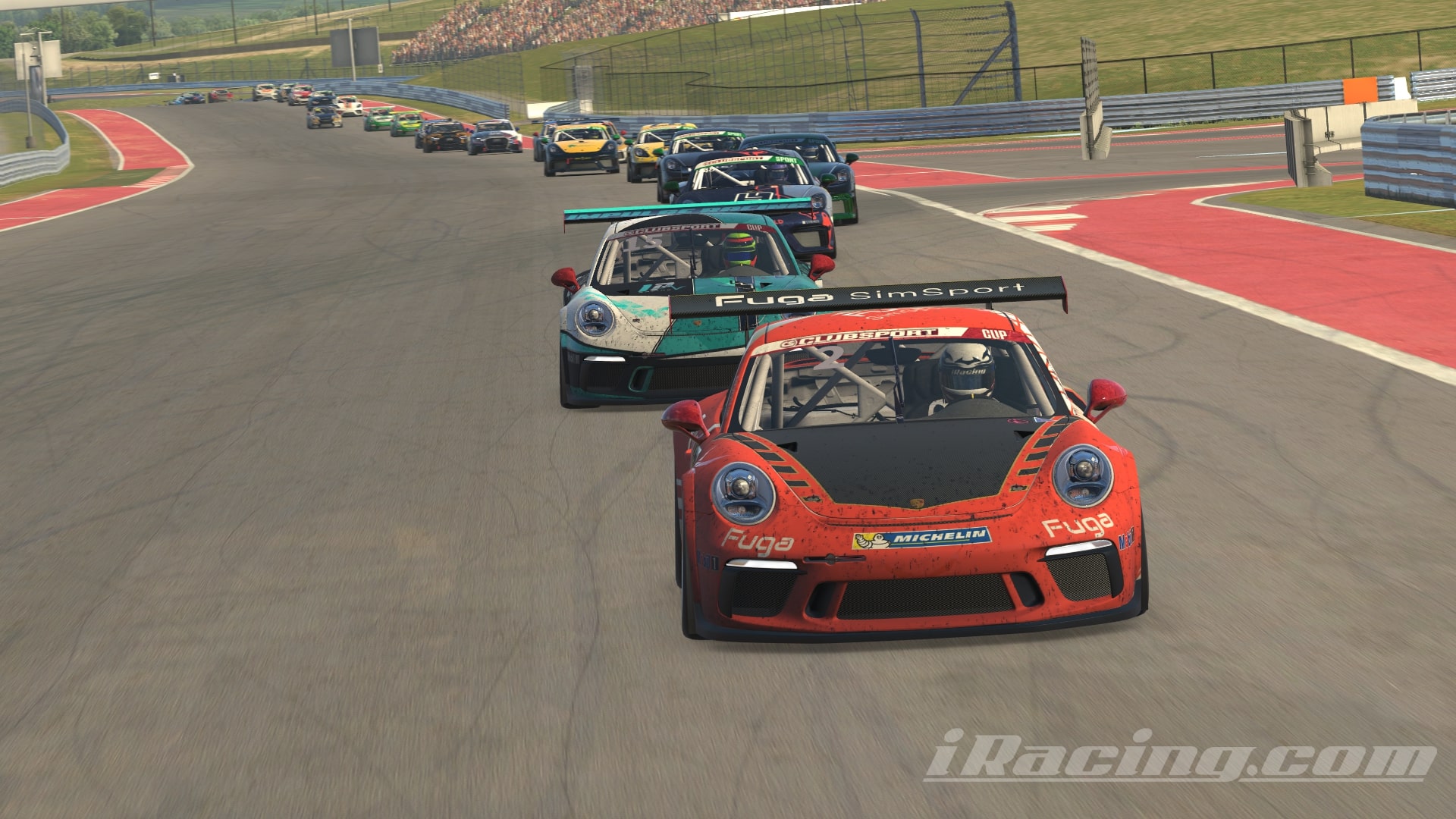 Starting with the 15-minute time slots for qualifying in IVRA Clubsport, the significant practice done did not transfer to the qualifying results of both our cars. With COTA being a very unforgiving track, both cars struggled to get a top 5 result. The slipstream strategies of other teams also turned out to have its advantages. This resulted in a starting position in the midfield for both cars in their respective classes.

Kevin Weinreich and Tobias Maisel were the guys responsible for the race start. From last race, we learned the starts in this season are hectic and close. Especially in the TCR class. Knowing this, still a lot of problems arose during the first stint of the race. The Porsche car struggled a lot in traffic, including contact with another team due to them missing a braking point. In the mean time the TCR received some damage, because Kevin Weinreich was pushed wide during an overtake and ghost contacted into the wall. The difficulties at the start resulted in both cars driving at the back of their classes. 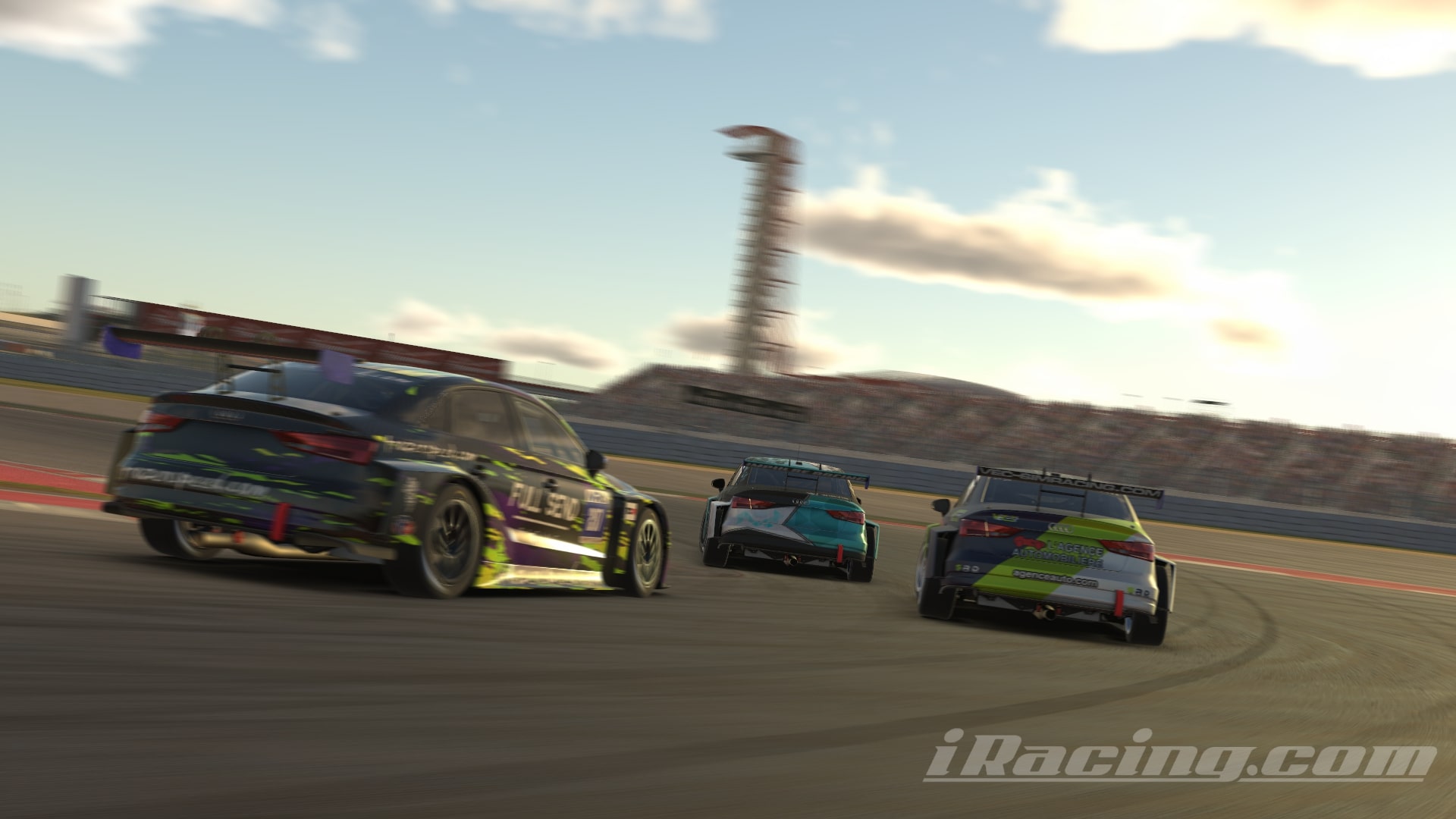 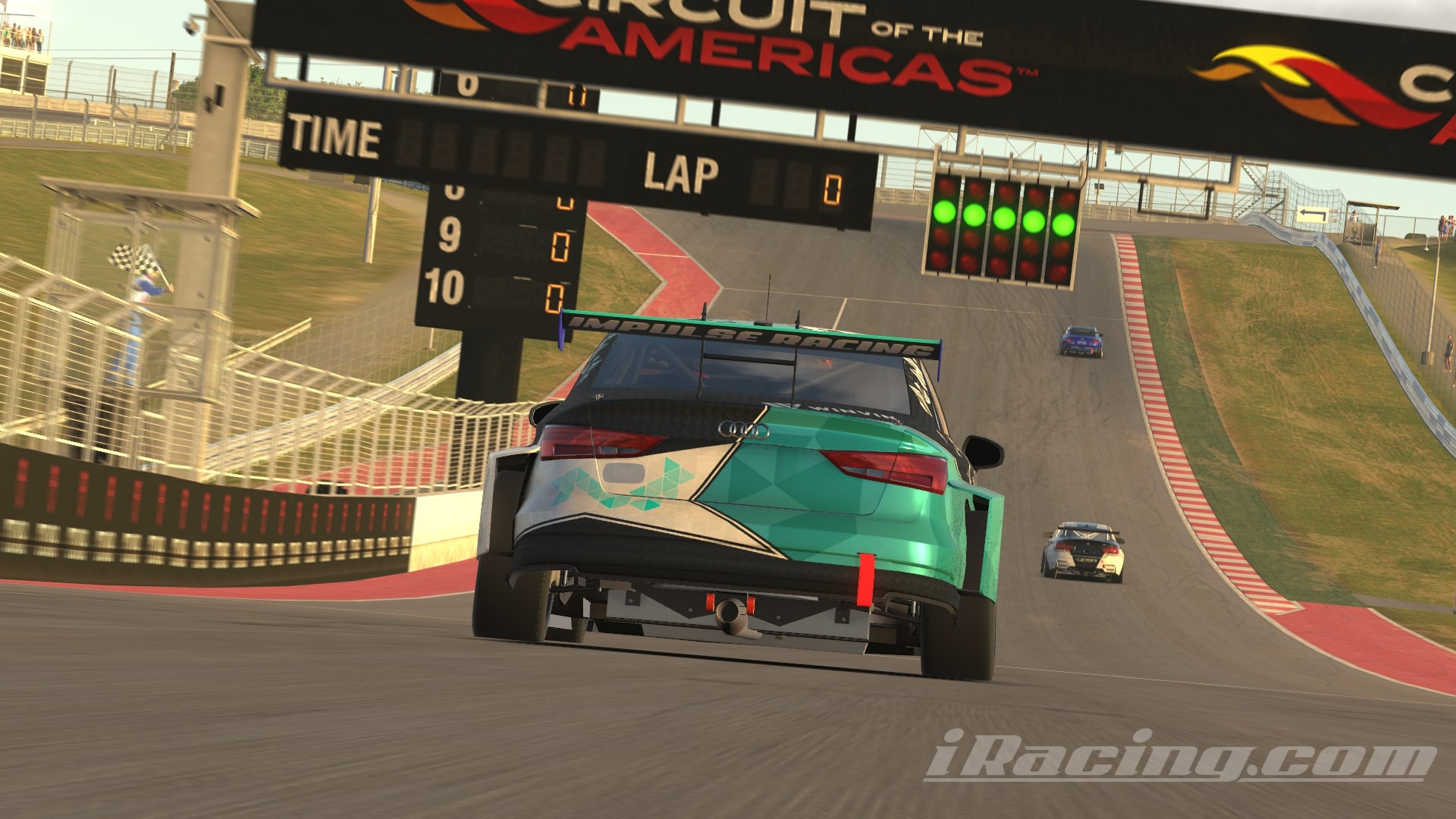 Then the strategy calls started. With the safety car coming out, both the Porsche Cup and TCR car had the possibility to fix their damage in the pits without losing time. Thereby, a lot of the other teams did not choose to do a pitstop. This resulted in an advantage, due to a so to say “free” pitstop. Both teams had to get through the field in their second stint, being completely last after the safety car restart.

In the second stint both drivers did a very good job moving up the field. Although the TCR maintained damaged, the pace looked strong and was not far off from the front runners. The Porsche Cup profited from the safety car as well, ending up in the midfield.

In the middle of the race a second safety car was deployed. For the TCR this was the perfect strategy call, having an empty tank and doing another “free” pitstop. For the Porsche Cup it was less favorable, because Pascal Costa needed to splash and dash in the last 20 minutes.

Nevertheless, the final hours for Pascal Costa were about to be a drive on the limit. After Tobias got a little gap to the opponents, Pascal Costa could take over the car in a little bit of clean air. Knowing they had to compensate the strategy call, they pushed for 1,5 hours straight. This resulted in them being the quickest Porsche Cup on track for a decent bit. In the statistics posted, Pascal Costa was the quickest driver of the race. Capitalizing on some penalties for track extending of the competition, the Porsche Cup ended in second place! An amazing result looking at the race. Pascal Costa and Tobias Maisel state as following:

" Second place was above our expectations and we are proud that we accomplished that. Now that we are in third position overall, our motivation to push even harder for the next round at Barber couldn't be higher. We are hyped for the races to come in IVRA Clubsport and hope to deliver as much as we did on COTA "

During the second safety car Andreas Gillmann stepped into the TCR car. With the good strategy call, the car was into fourth position. With a new setup system, the car was prone to be difficult on cold tires. In the first laps after the safety car restart, Andreas Gillman did an amazing job avoiding a lot of crashing cars. Unfortunately, a little spin on the backstraight resulted in some time loss. Nevertheless, the rest of the stint was strong and Martijn Asschert was ready to drive the car to the front of the field.

After Martijn Asschert took over, the TCR was in P14. The pace was strong compared to the field and the gaps were small due to the safety car, so the TCR team felt there was something to gain. Indeed, their feeling was right. Martijn Asschert drove some front field pace with a damaged car. Over the last hour of the race, he managed to get the car in a finishing position on fourth place. Not to forget the crucial overtake he did in the last 5 laps on the inside of turn one. Without the pass, it would have possibly been only an eight place. In conclusion, a very strong comeback drive. Being in P4 in the standings, our TCR team is also still fully competing for the championship.

Broadcast of the race can be found below.