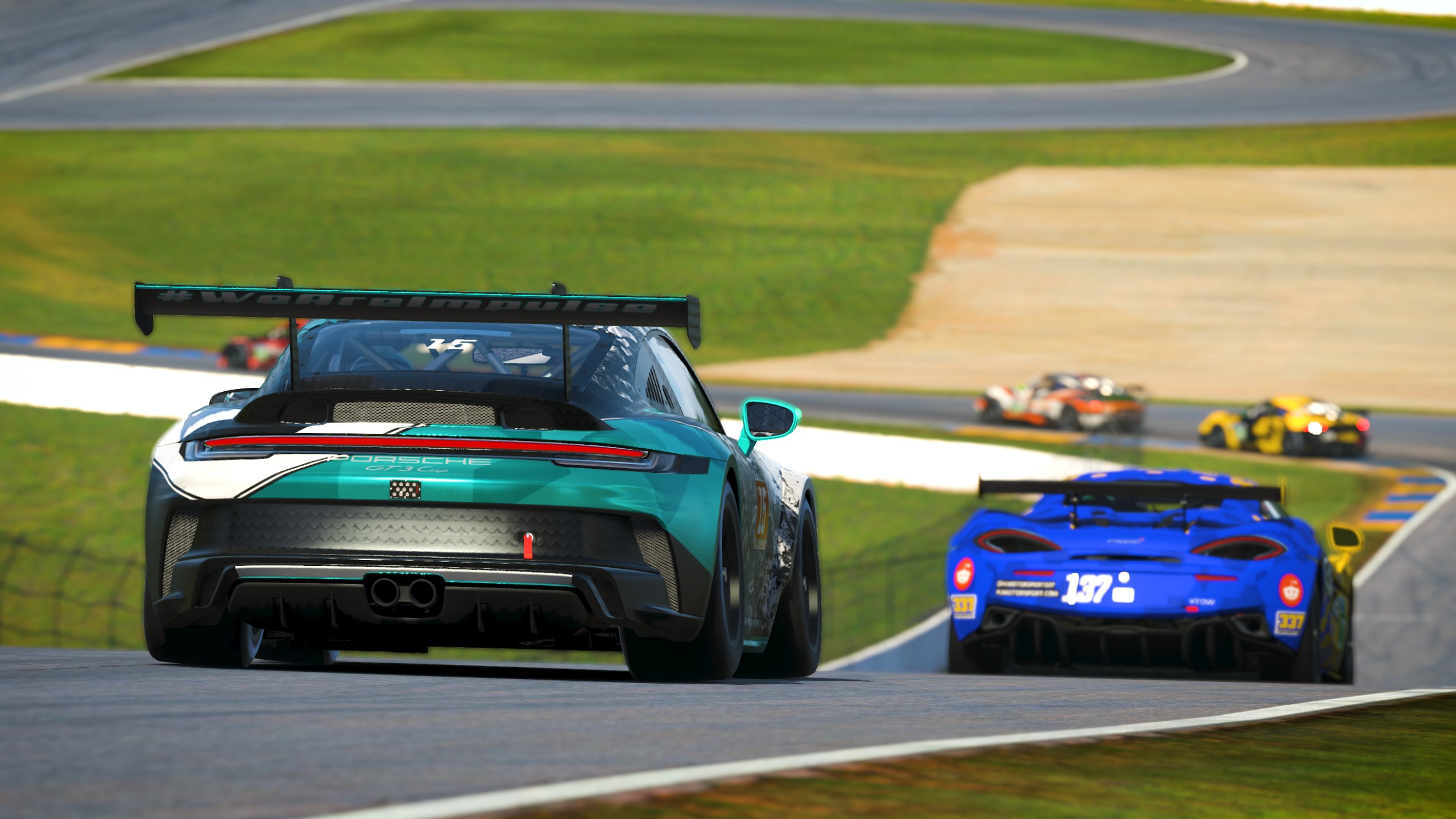 This article is a review of the last two rounds of IVRA Clubsport we participated in. It turned out to be two tough ones. Upcoming weekend round 5 of IVRA Clubsport is on the schedule at Zolder. This is going to be an important race to see if we can turn around the luck of the last two rounds. The season started very well, especially for the TCR cars with a championship lead. Let us give a short summary about the last two races, which we tend to rather like to forget as quickly as possible.

After not the optimal qualifying all cars started in the midfield at Virginia for round 3 of IVRA Clubsport. Off to a good start, it was, looking back on the pace of last races also as expected. The TCR cars and Porsche Cup quickly started to move forwards and after 22 laps Tim de Vries even managed to drive the #233 TCR car towards the front of the field, having started in 4th place.

Until those laps, it was all fine. Our drivers seemed to have found a good rhythm and controlled their positions. Then the first safety car hit in lap 35. This time in luck for the Porsche Cup as they just had an incident resulting in damage. They were able to repair the damage, slot in behind, and Pascal Costa was up for a last to first challenge.

This last-to-first challenge went well. As always Pascal Costa comes strong to the races, being able to get back to third place before Marco Jager stepped into the car. When he was in a rhythm, the second safety car was released. This was about 10 laps before the end of the race. Disaster stroke for the Porsche Cup at the restart. The unnecessary risk from two other teams, making it three-wide in turn 1 and hitting our Porsche Cup. A meatball flag for the car and a last-place finish was the result. Very bad luck after what could have been a strong podium finish in this round of IVRA Clubsport. 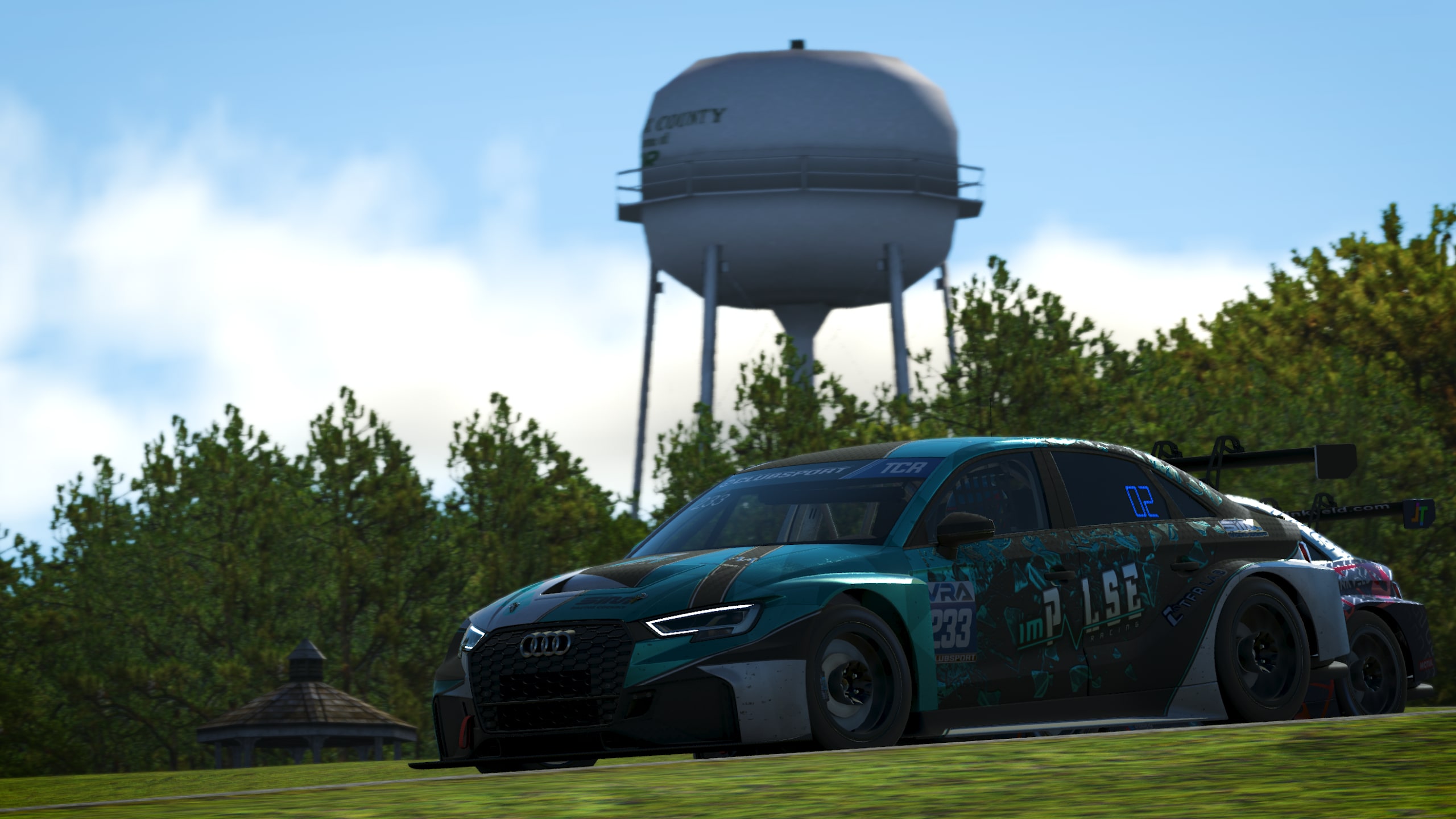 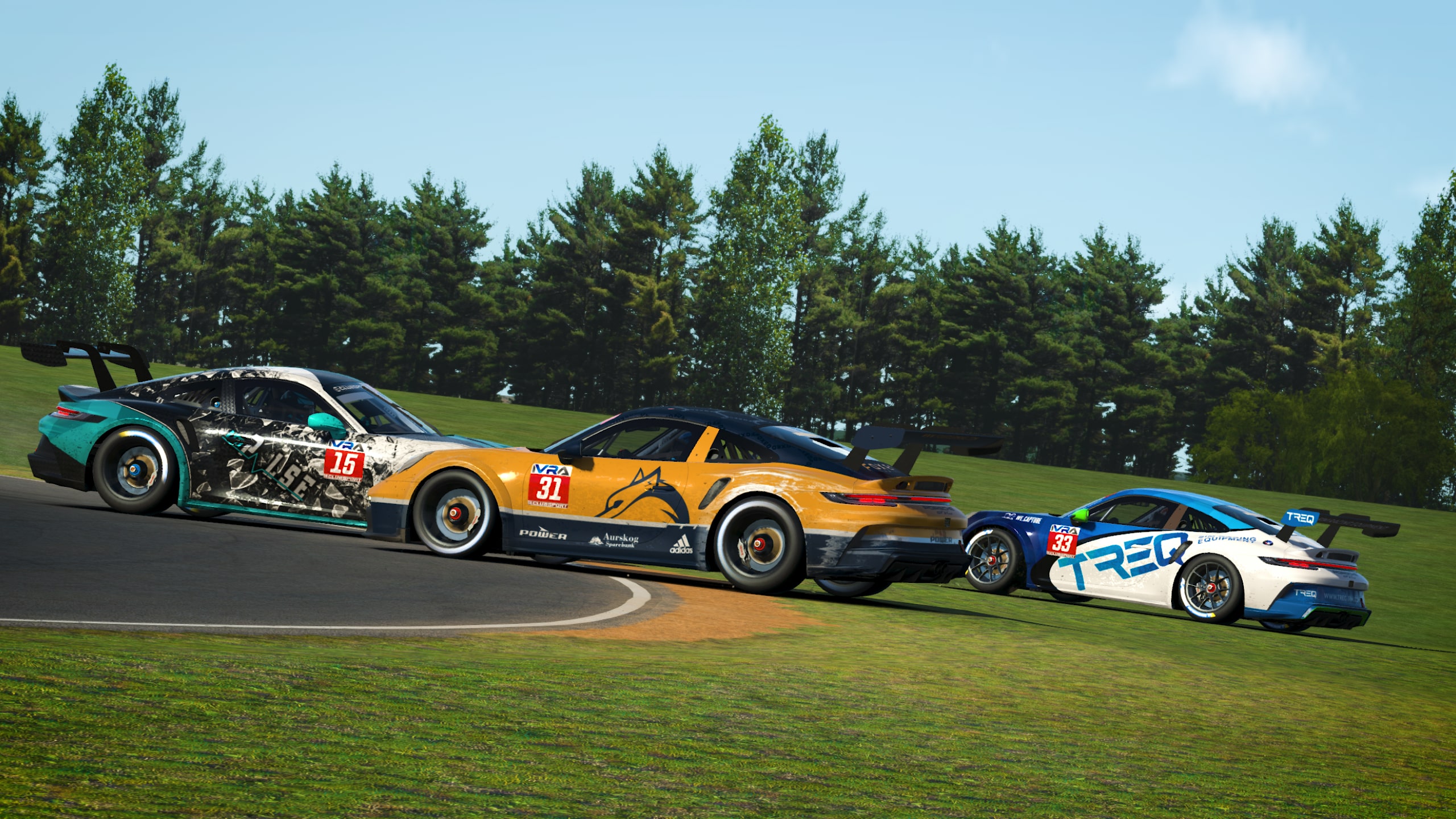 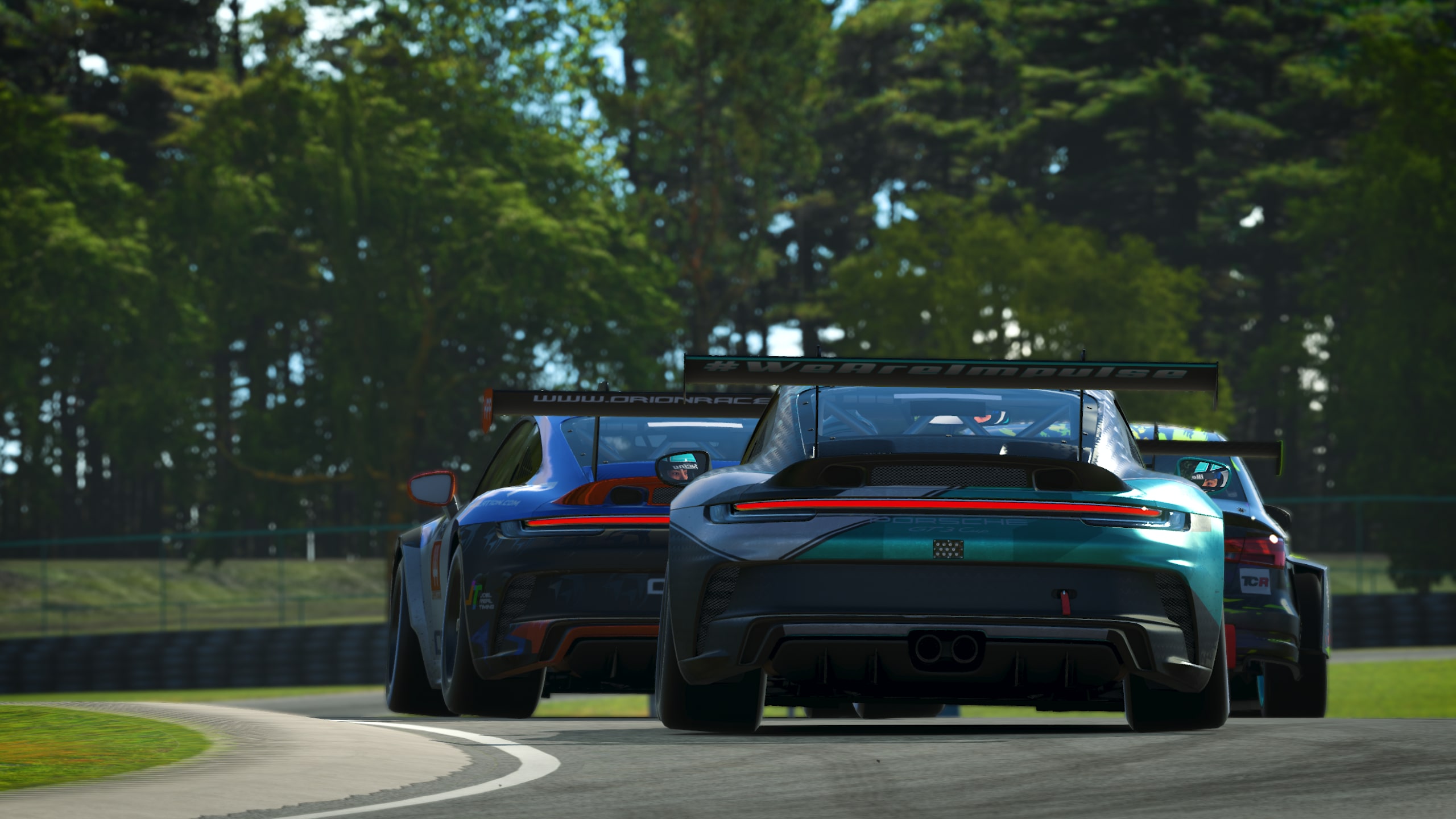 Unfortunately, some bad luck arrived. Some troubles at the Oaktree and a strong save from Jan kept the car alive, but they fell back to the third position. Shortly after that, the safety car came out and with 5 laps to go at the restart it would be hard to fight back to the front. Lots of traffic was mixed up on the train. The leading TCR car was luckily no contender for the championship and with the #233 in third place at safety car restart it was looking decent. The #222 with Andreas behind the wheel was following closely in fourth place. This would turn out to be the finishing result as well. Good enough and still a good championship points lead for the #233.

First, we start with the race of our Porsche Cup, cause they were off with a bold strategy statement in round 4 of IVRA Clubsport. Starting from fourth place and moving slowly up to second place Pascal Costa was on it again. In this race, Alexander Hetmank was his teammate. This race would consist of a lot of safety cars. Four to be precise and after the first one, our Porsche Cup managed to come out in the lead of the race. The setup was at a bit of a disadvantage on the straight line, so switching strategy was the move to try and get a good result.

All was going well. The Porsche Cup was driving in the front of the field until Alex got into trouble with a car from another class. This resulted in a little bit of damage, which could be solved during the second safety car. Alex got back a couple of positions after falling back a bit and was in eighth place before the second safety car. Due to the strategic advantage, they moved up to the front of the field again after the safety car and Alex was pushing to keep in front. The setup straight-line speed turned out to be a disadvantage again and Alex was not able to hold the top three. With Pascal taking over in the last bit of the race after the last safety cars he was driving in fourth place. They recognized a bit too late all the front runners were saving fuel to get rid of a splash and dash, so needed to save a lot as well. With some good defending Pascal could hold fourth place bringing home a good result after the disaster ending in Virginia. Hopefully, Zolder brings a well-deserved podium, looking at the pace shown in the first four races. 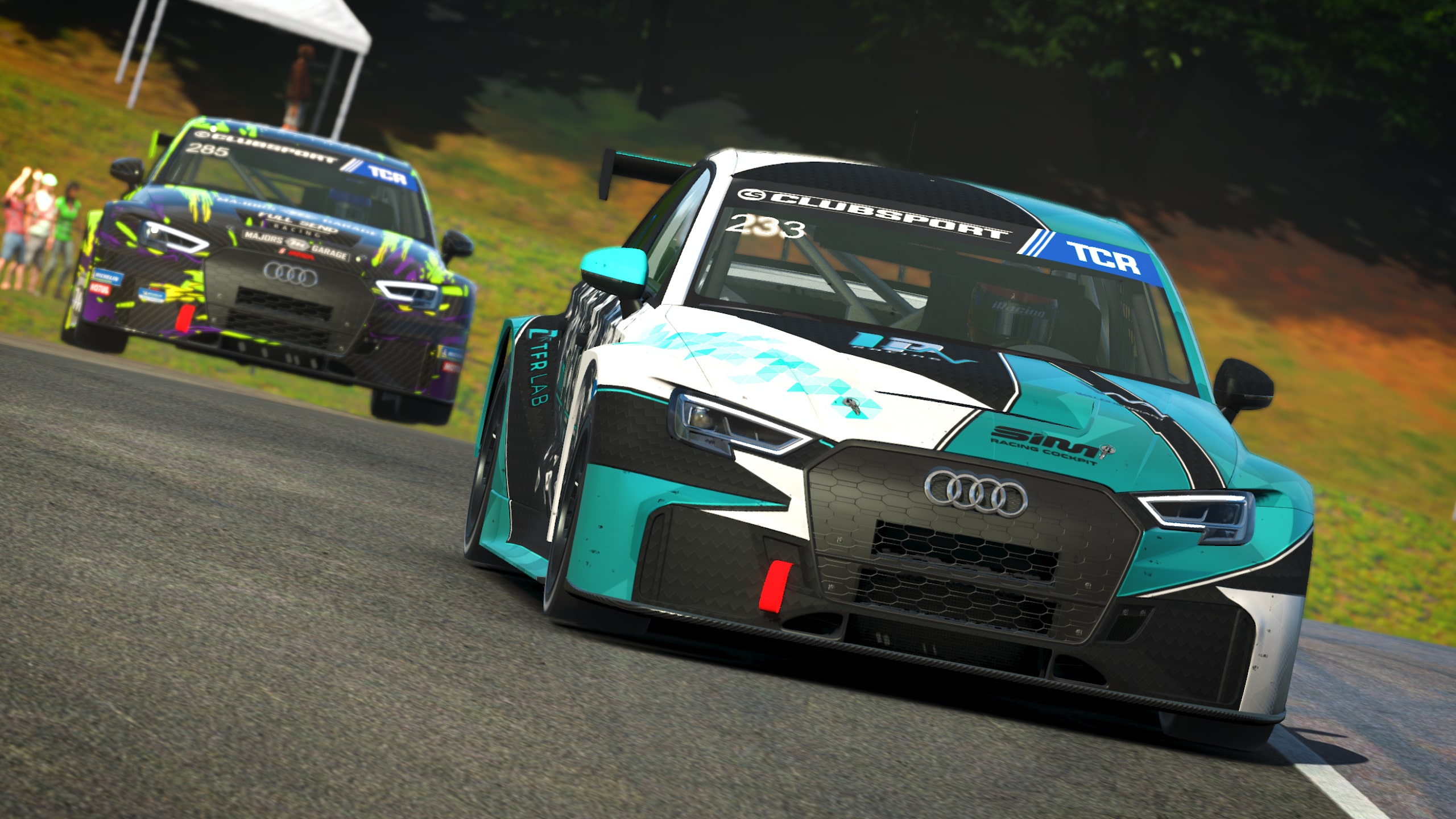 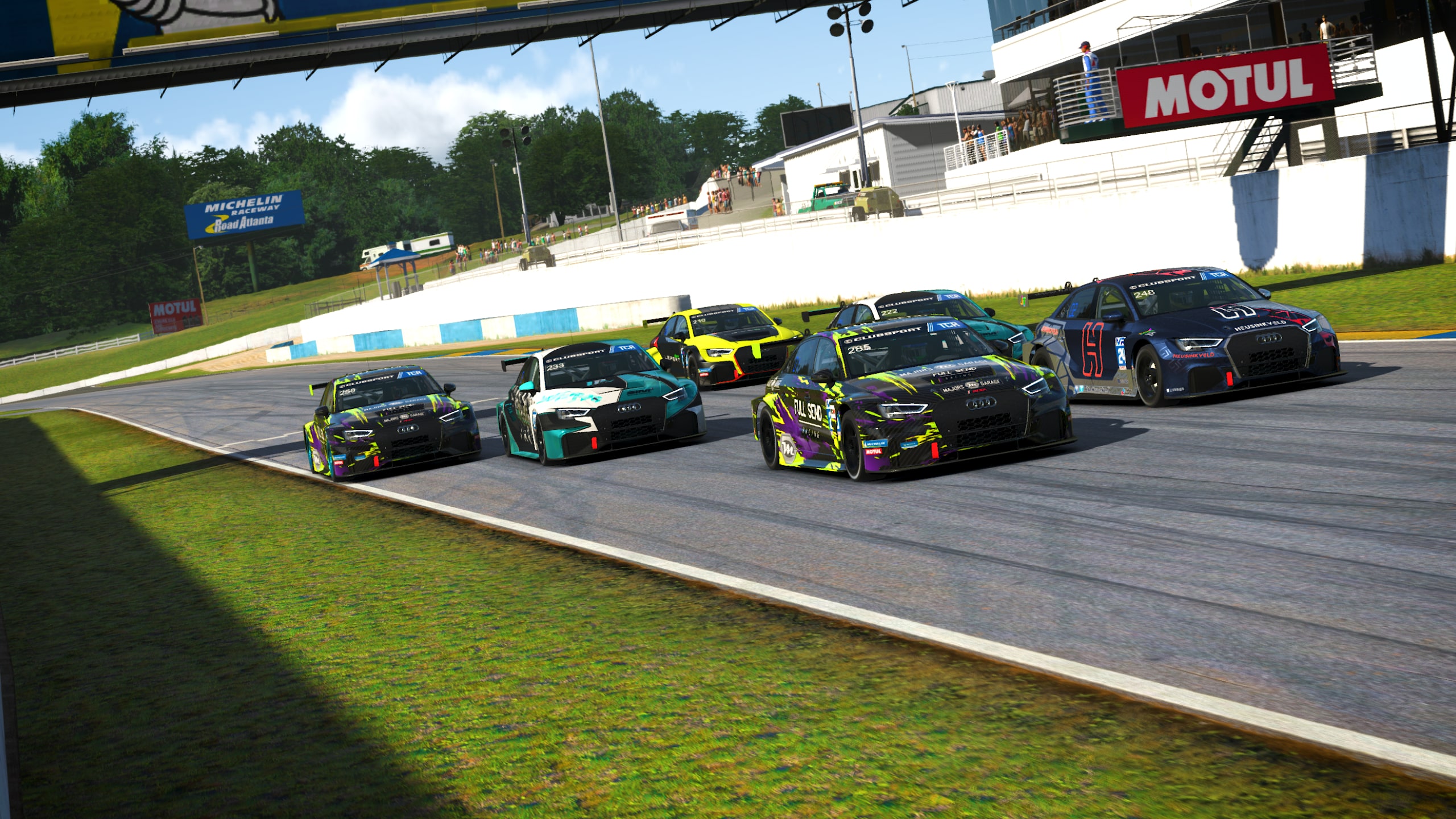 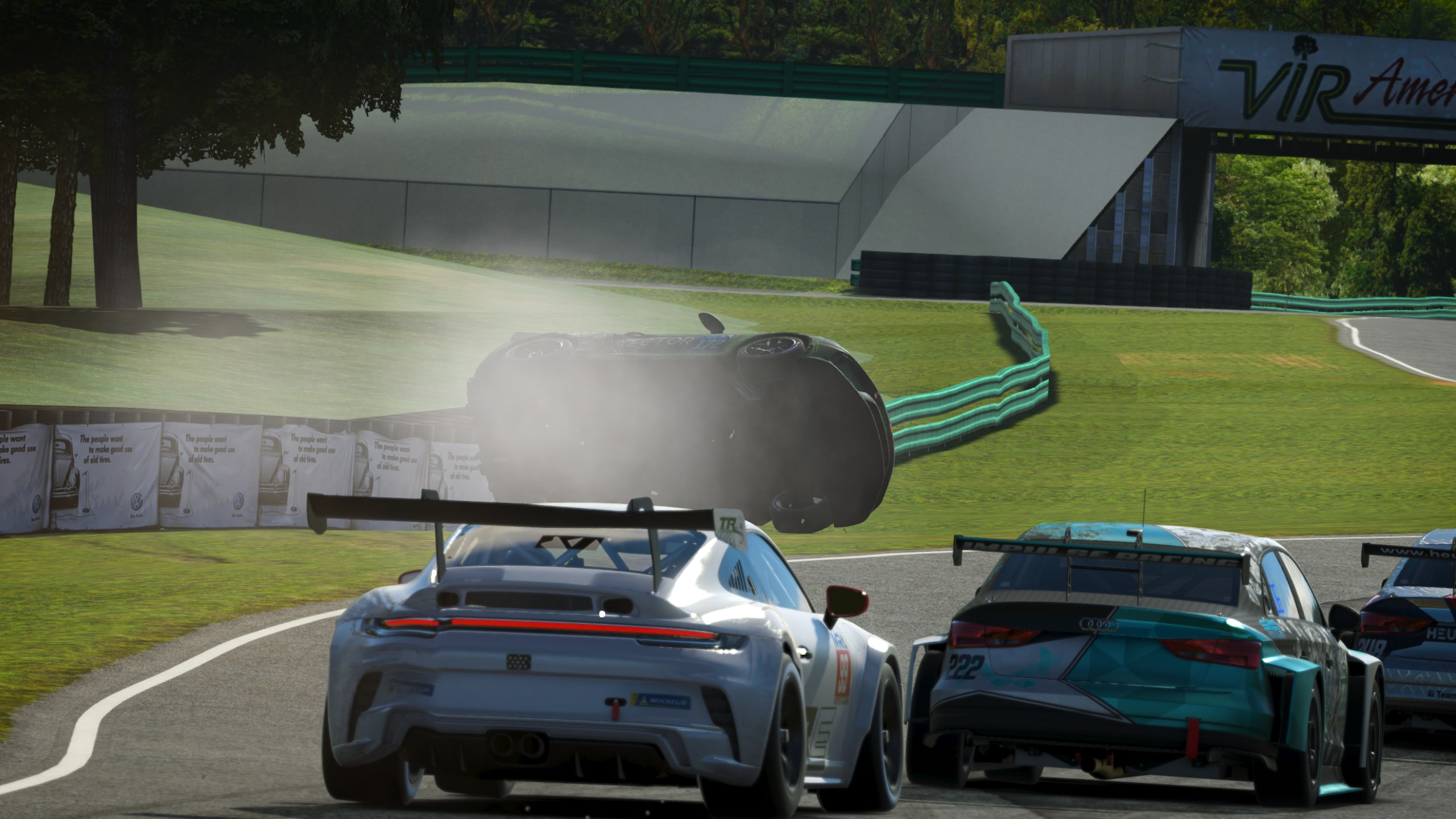 For the TCR cars, we are going to keep it short. It has been one of those races the luck is completely against you and especially the #233 had a nightmare. The start was very good. Martijn qualified the #233 in third place, but after 10 laps he found himself leading the pack. He could drive away from the field a couple of seconds. He has controlled the race until the first safety car arrived. In the pitlane, he lost the lead due to under fueling of the competition. Being second place at the restart the leading Full Send Racing car completely misjudged the field creating a big pile up and crashing cars. Martijn needed to take avoiding action, hitting the wall very lightly. Iracing decided meatball damage and 15 minutes of repair. The other cars got out unharmed.

Frustrating enough that was not all. Chris and Martijn both on the #233 decided to keep pushing and got back 3 laps of their 5 laps behind on the leader. Then a GT4 car decided to drive into their car on the straight, resulting in another meatball and a last-place finish. As a result, the Impulse TCR #233 lost its championship lead. Still, everything is possible as it was a big lead and now, we are only a couple of points behind.

Going towards car #222 now, which also had something to deal with. On the car, Jan and Christopher, cruising around a podium finish for the whole race. Both showed strong consistency and made life difficult for the Heusinkveld and second Full Send car. Having the pace on both cars and with the #233 car crashing out twice they were on to finish the race in second place. All looked good until bad luck decided to arrive at Christopher. In the S-sections a Porsche Cup car decided to do an impossible dive, taking out the #222 TCR. Damage was limited, but due to Race Control deciding an unsafe rejoin they fell back in the pack. In the end, luckily Christopher was able to get back a third-place finish, also with the help of the last safety car.

In the end, especially for the TCR cars, a race to forget. The last two IVRA Clubsport races at Zolder and Red Bull Ring are going to be decisive moments for the championship. The Porsche Cup can come back strong as well and has an aim for the podium in the championship as well. With our TCR drivers showing up with the strongest car every race, we are confident we can have the strongest car for the last races as well. We keep pushing to get back the championship lead. And have it at the end of the season!